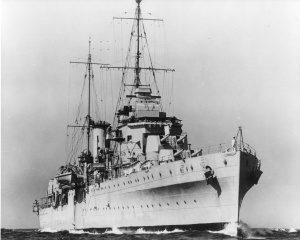 History of the Ship

His Majesty’s Australian Ship Perth was commissioned into the Royal Australian Navy on 29 June 1939 and served with distinction during the early years of the Second World War. The Modified Leander Class light cruiser was sunk on 1 March 1942 in company with the American heavy cruiser USS Houston while fighting numerically superior Japanese naval forces at Sunda Strait. At the time of her loss, Perth carried a complement of 681 officers, ratings and civilian canteen staff. 353 were killed in action or perished as a result of the ship’s sinking, and four died after reaching shore. Of the 324 who became prisoners of war of the Japanese, 106 died. 218 survived to return home.

The need to commemorate Perth and her gallant ship’s company was first recognised by the City of Perth during the Second World War. On 12 August 1943 a plaque, ‘Dedicated in grateful remembrance to the officers and men of HMAS PERTH’, was unveiled at the Perth Town Hall. On 26 February 1950 the City of Fremantle Sub Section of the Naval Association of Australia instituted an annual memorial service for Perth. It is held at St. John’s Church, Fremantle, on the last Sunday in February.

In 1964, a desire to further commemorate Perth, coupled with the need to establish a permanent headquarters for the Navy League of Australia, Western Australian Division, led to a proposal to erect a memorial hall on the banks of the Swan River at East Fremantle. The HMAS Perth Memorial Hall was officially opened on 26 February 1967 – in time for the 25th anniversary of the Battle of Sunda Strait. The ship’s Coat of Arms, which had been presented to the Perth City Council for safekeeping during the war, featured on a wall dedicated to the memory of Perth and the ship’s company. As was intended, the hall accommodated the WA Navy League and the Australian Sea Cadet Corps headquarters, as well as the Sea Cadet unit TS (Training Ship) Perth.

In February 1992, to mark the 50th anniversary of the Battle of Sunda Strait, a reunion of survivors was held in Perth. Sixty Perth men from around Australia and New Zealand, and ten Houston men from the United States attended. By 1 March 2017 – the 75th anniversary of the battle – the number of Perth survivors had dwindled to two. This led to public discussion about a memorial to HMAS Perth and the ship’s company.

The HMAS Perth (I) Memorial Foundation Incorporated was formed in 2019 to establish a permanent memorial to commemorate the life and loss of HMAS Perth. The memorial will acknowledge and honour the members of the ship’s company who:

The memorial will also acknowledge the families whose lives were forever changed by the loss of HMAS Perth on 1 March 1942.

The HMAS Perth (I) Memorial Foundation Inc proposes to create a memorial that will complement and enhance the existing HMAS Perth Memorial Hall and the TS Perth training establishment located on Riverside Road, East Fremantle, in Western Australia.

A key requirement is that the memorial be suitable for ceremonial occasions, commemorative events, flag-raising, and wreath-laying, in order to facilitate both public and private remembrance. To this end, a Wall of Honour will bear the names of the entire ship’s company, which came from all corners of Australia as well as the United Kingdom. Each man’s name will be engraved into highly polished black granite to emphasize the solemn purpose of this place of remembrance. Removable flagpoles will be provided for ceremonial and wreath-laying occasions.

These requirements have been met by the concept design produced by acclaimed sculptors Charles Smith and Joan Walsh-Smith of Smith Sculptors , whose works include the HMAS Sydney (II) Memorial at Geraldton, the National Memorial to the Australian Army in Canberra, and the John Curtin statue in Fremantle.